Zanewslive.com
Home South Africa Your weather: floods are expected on the coast of KZN Damage from the flood in KwaZulu-Natal.

The South African Meteorological Service has issued an orange Level 5 warning of devastating rain that will lead to widespread flooding of roads and settlements, danger to life and possible relocation of affected communities expected along the KZN coast.

Along the east coast of the Eastern Cape and the interior of the KZN one can expect a yellow level 2 warning of destructive rain.

A yellow level 2 warning of strong thunderstorms is expected over the eastern part of the Free State, eastern Gauteng, the Highlands and the Mpumalanga slope, as well as the eastern and central parts of Limpopo.

Meanwhile, on the high mountain peaks of the Eastern Cape and southern Drakensberg, small snowfalls are expected, accompanied by very cold and humid conditions. The Central Karu in the Western Cape and the southern Karu Hugland areas in the Northern Cape will also be cold and humid.

Weather in your province:

Gauteng it will be cloudy and cold, with occasional showers and thunderstorms.

Mpumalanga it will be cool in Lowveld, where it will be partly cloudy at first, otherwise cloudy with cold, occasional showers and thunderstorms.

Limpapo in the northeast it will be warm, otherwise cloudy to partly cloudy, cool, in places intermittent rains and thunderstorms.

The Northwest will be cloudy and cool to cool, separately, intermittent rains and thunderstorms.

The Northern Cape will be partly cloudy and cool-cold, in the east isolated showers and thunderstorms. Morning fogs are expected along the coast.

The Western Cape places in the west will be good, otherwise cloudy to variable cloudiness and cold to cool.

The wind along the coast will be light to moderate south-southeast, in the west, in the afternoon will be southwest, otherwise west to northwest.

The western half of the century Eastern Cape will be cloudy and cold, intermittent rains and rain, but in the southwest singly.

The wind along the coast will be light to moderate westerly.

In the eastern half of the Eastern Cape it will be cloudy and cold, in some places short-term rains with rain, but in the east are widespread. In high areas it will be very cold.

The wind along the coast will be moderate southerly, but at first southerly weak westerly.

KwaZulu-Natal in the west it will be cloudy and cool but cold. Intermittent rains and thunderstorms are expected.

The wind along the coast in the morning will be moderate southwest north of Durban, otherwise moderate to fresh southeast. 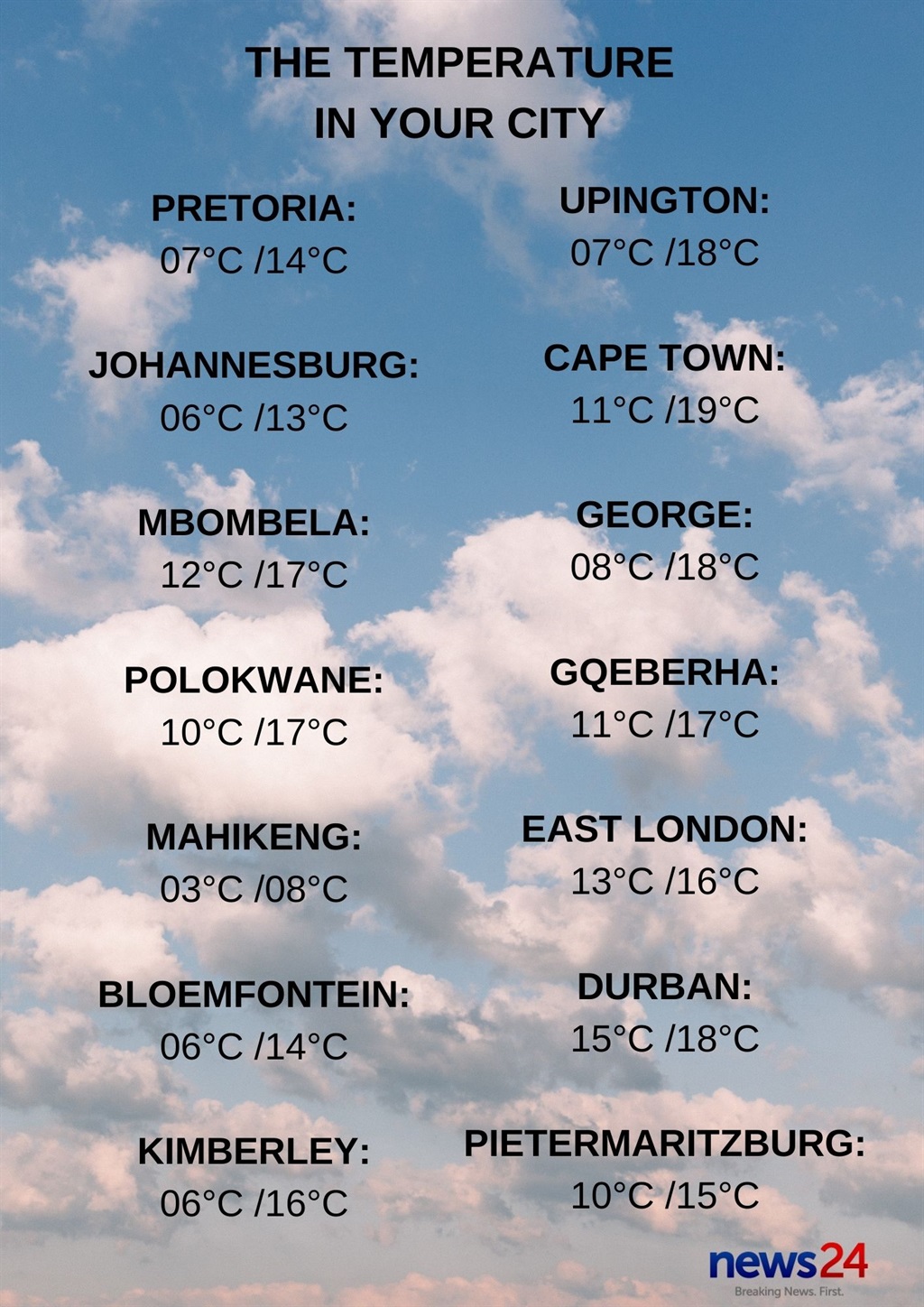