Zanewslive.com
Home South Africa Ukrainian troops have broken through Russian lines in a major offensive in... 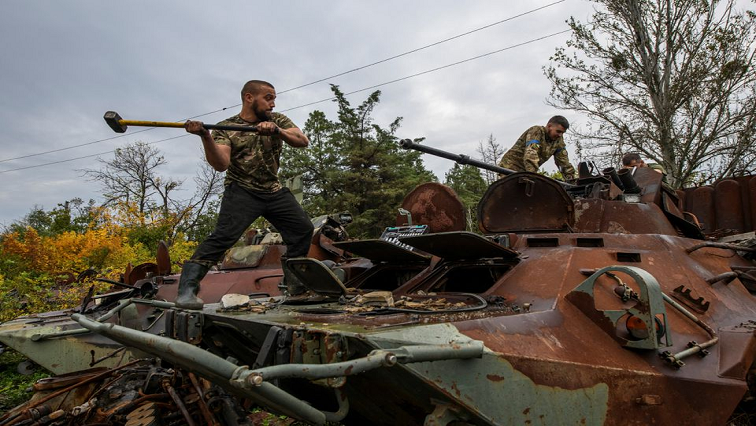 Kyiv did not officially confirm the progress, but Russian sources acknowledged that the Ukrainian tank offensive had advanced tens of kilometers (miles) along the west bank of the river, reclaiming a number of villages along the way.

The breakthrough reflects Ukraine’s recent gains in the east that have turned the tide of the war against Russia, even as Moscow has tried to raise the stakes by annexing territory, ordering mobilization and threatening nuclear retaliation.

“The information is tense, let’s say, because, yes, there really were breakthroughs,” Uladzimir Saldo, the Russian-appointed head of the occupied parts of Ukraine’s Kherson region, told Russian state television.

“There is a settlement of Dudchany, right on the Dnieper, and there, in that area, there was a breakthrough. There are settlements that are occupied by Ukrainian forces,” he said.

Dudchany is approximately 40 km (25 miles) south of where the front stood the day before, marking one of the fastest advances of the war and certainly the fastest in the south, where Russian troops were dug in to heavily fortified positions along a mostly static front line from the first weeks of the invasion.

While Kyiv has remained almost completely silent, as it has in the past during major offensives, some officials did describe what they called unconfirmed reports of advances.

Adviser to the Ministry of Internal Affairs of Ukraine, Anton Gerashchenko, published a photo of Ukrainian military personnel posing with their flag, which depicts a golden statue of an angel. He said that it was the village of Mihailovka, about 20 km from the previous front.

“In the last few days, we saw the first photo of Asakorauka… we saw our soldiers near the entrance to Mihailovka, we saw our soldiers on Khraschanovka, next to the monument. This means that Zlataya Balka is also under the control of our armed forces, and it means that our armed forces are moving strongly along the banks of the Dnieper closer to Berislav,” Kherson regional council deputy Siarhei Khlan told Reuters, referring to the villages. in the district.

“Officially, there is no such information yet, but pages of (Russian) social networks, which are panicking… absolutely confirm these photos.”

Similar tactics in the east

The advance in the south reflects tactics that have brought Kiev major gains since early September in eastern Ukraine, where its forces quickly seized territory to gain control of Russian supply lines, cutting off larger Russian forces and forcing them to retreat.

This opens the way for it to advance deep into the Luhansk region, threatening the main supply route to territory captured by Moscow in some of the bloodiest battles of the war in June and July.

Putin reacted to Russia’s failures on the battlefield over the past month with an escalation: he announced the annexation of the occupied territory, called up tens of thousands of men in reserve and threatened nuclear revenge.

In the south, Ukraine’s offensive is aimed at supplying thousands of Russian troops – possibly as many as 25,000 – on the west bank of the Dnieper, where it has sent a large contingent to stop a counterattack that Ukraine announced there in August.

Ukraine has already destroyed the main bridges across the Dnieper, forcing Russian forces to use makeshift crossings. A significant advance along the river could bring the remaining crossings into artillery range.

“The fact that we broke through the front means that … the Russian army has already lost its ability to attack, and today or tomorrow it may lose its ability to defend itself,” said Oleg Zhdanov, a Kiev-based military analyst.

“A month of our work to destroy their stockpiles and reduce the fighting capacity of this group means they are operating on minimal rations of ammunition, fuel and food.”

Russian military bloggers described the advance of a Ukrainian tank along tens of kilometers of territory along the Dnieper.

“When so many Russian channels sound the alarm, it usually means they’re in trouble,” Rob Lee, a senior fellow at the Foreign Policy Institute think tank, wrote on Twitter.

The news of Ukraine’s advance on the battlefield comes amid chaos in Russia over the mobilization that Putin ordered 10 days ago. Tens of thousands of Russian men were drafted into the army, and tens of thousands fled abroad.

The Russian authorities do not prescribe the criteria for sending to fight. Putin stated that mistakes were made and people were drafted who should not have been.

The latest sign of confusion is that on Monday, Mikhail Degtyarov, the governor of Khabarovsk Krai in Russia’s Far East, said that about half of the men drafted there had been deemed unfit for service and sent home. He dismissed the military commissar of the region.