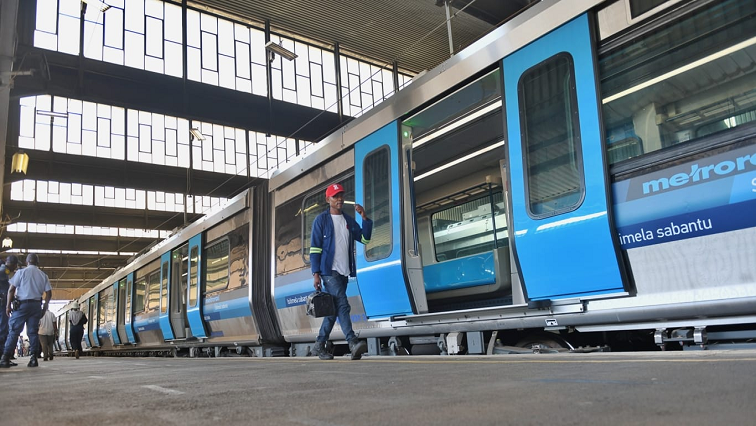 Transport Minister Fikile Mbalula says suspended trains in Soweto and Cape Town will soon be restored, with infrastructure development and improved safety and security a priority.

Services were suspended due to widespread vandalism on rail infrastructure two years ago.

The situation has been worsened by the outbreak of COVID-19, which has resulted in the suspension of train services due to hard-blocking registrations.

The government has allocated more than 1.6 billion rand to rebuild the damaged railway infrastructure.

More than 200,000 commuters who rely on rail across Gauteng and thousands more in the Cape have been affected by the train disruption.

Kicking off the department’s Transport Month in Pretoria, Mbalula said work was accelerating to restore rail links across the country.

“Our work on the restoration of railway communications continues on all railway corridors of the country. This includes lines such as Naledi – Johannesburg and so on, including work to achieve limited electrified services in the area. The eight stations being renovated are New Canada, Mlamla Nkonzi, Orlando, Nancefield, Kliptown, Lance and Tivawela. Work is also underway to restore rail transport in Cape Town.”

Mbalula also announced the official reopening of the upgraded Pienaars Rivier rail corridor, which links Pretoria and Mamelodi to the east of the capital. Commuter and rail traders welcomed the restored services.

“It’s very cheap and people can afford it. And we have customers. We help them. Everything is fine with the train.”

Public investment in the transport sector is aimed at stimulating development and creating jobs as part of the country’s Nine-Point Plan. pic.twitter.com/d4qbrktfxI

“And so I will not allow anyone to derail me about what needs to happen at PRASA. And if someone stands in my way, I don’t care who it is. You can think you’re my friend or whatever. I put you in your place. And then I’ll kiss you goodbye. We will meet in the next life. And I will be happy about it. Our job here is to change and make things happen for the government. That’s what has to happen.”

Acting CEO of PRASA, Hisham Emeran, says a strong crackdown has been taken against corrupt staff, with many arrested and fired.

National Transport Month, dedicated to service delivery, will also focus on road carnage, which claims around 14,000 lives on the country’s roads every year.

This morning we witnessed the re-opening of another commuter rail corridor between Pienaarsport and Pretoria. This is in line with our commitment to bring 10 priority corridors back into service this year
#OTM2022