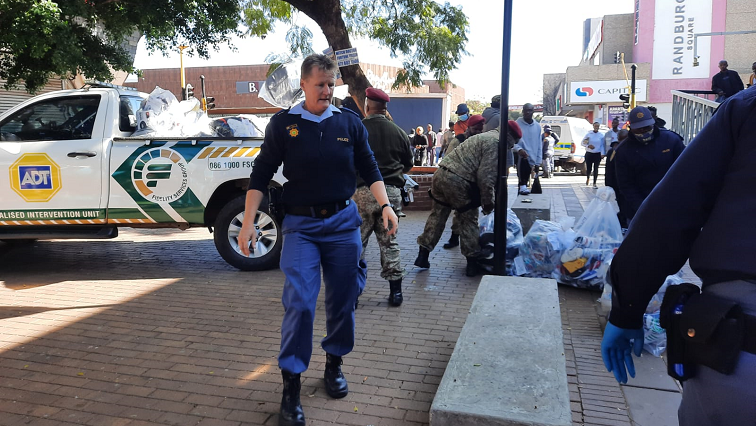 More than 70 undocumented migrants were arrested in one of the buildings searched. Police also seized more than 80,000 counterfeit goods worth about R8 million.

The raids are part of Operation O Kae Molao, a weekly anti-crime operation.

His first stop was Merkato Mall, a building in the Central Business District, where they seized counterfeit goods, including cigarettes, cosmetics and beauty products, with an estimated value of 8 million rand.

“We have influence, make no mistake about it, once you get a criminal in his pocket, you break him. You know that more than 100,000 rubles have already been collected here. If you are a business person and this money is taken from you, then it will definitely be a failure for you. First, we started dealing with those who sell counterfeits on the streets. But we thought let’s deal with the people who supply this thing. So you see we’ve upped our game and we’re dealing with that.”

Police went from room to room, knocking on the doors of the Florence Nightingale building, looking for suspected criminals, as well as stolen mobile phones and laptops, which were the proceeds of the robberies.

Residents of one of the destroyed buildings say there is a lot of criminal activity there, including robberies.

Police have moved to another derelict building known as Kasamia in Hillbrow, which Mawela says is a haven for street robbers.

The building is overflowing with dirty sewage, it’s infested with rats, the pipes are leaking, and the residents are hooking up the electricity illegally. The resident, who did not want her name used, says they live in fear because of crime, which she says is out of control.

“That’s why they take people’s bags and run away with the bags into the building. There were fences that closed us in, they took them out to make it easier for them. Charge if you ask, they don’t come here. [There are] Shots are fired from time to time. Bad, unfortunately.”

Some of the counterfeit goods were discovered during a police raid in Joburg’s central business district today. Among them are cigarettes, cosmetics, cosmetics. Police also found R100,000 in cash in one of the buildings they searched.#sabcnews pic.twitter.com/VGqrahlYTH

Mavela says abandoned and derelict buildings in the CBD pose a major challenge for the police. He urged the owners to either refurbish them and make them habitable or turn them into student accommodation, which is in high demand.

“If they don’t want the building to be occupied, let them compact it. It’s easy to lock up a building like this because you can put bricks and mortar at ground level, lock the door, and no one can get in until you install whatever systems you want in your building. Abandoned buildings are safe havens for criminals.”