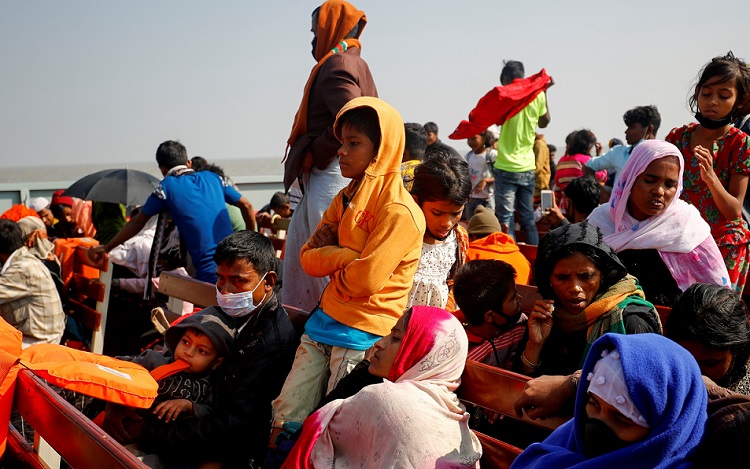 Myanmar’s Rohingya Muslims protested in refugee camps in neighboring Bangladesh on Thursday, the fifth anniversary of clashes between Rohingya rebels and Myanmar’s security forces that drove hundreds of thousands of Rohingya from their homes.

More than a million Rohingya live in camps in southern Bangladesh, the world’s largest refugee settlement, with little prospect of returning to Myanmar, where they are largely denied citizenship and other rights.

Bangladesh’s foreign ministry said in a statement that “not a single Rohingya” has yet returned to Myanmar due to the country’s “optional stance”.

Refugees, from children to the elderly, waved placards and chanted slogans across the sprawling camps, many wearing black ribbons to mark what they call “Remembrance of the Rohingya Genocide”.

“No more refugee lives,” the posters read. “Enough, enough” and “We want citizenship, we want justice.” We are citizens of Burma, we are Rohingya.”

“We are demonstrating today because in 2017 the Burmese (Myanmar) army killed our people in a genocide. They killed my husband and others, the soldiers raped us, then killed our children,” said protester Jamalida Begum.

“We have been telling the world the same thing for the last five years. But nobody listened to us. Today we demonstrate again to let the world know that we want justice.”

The United Nations has said the 2017 military crackdown was carried out with genocidal intent, and Myanmar is facing genocide charges at the International Court of Justice in The Hague.

Buddhist-majority Myanmar denies the allegations, saying it was waging a legitimate campaign in 2017 against insurgents who attacked police posts in northern Rakhine state.

“We want to return to our homeland with all our rights and under the direct supervision of the UN. We want security for our lives and wealth there,” he said.

Populous Bangladesh says repatriating refugees to Myanmar is the only solution to the crisis. Local communities are increasingly hostile to the Rohingya as funds for the refugees have run out.

UN agencies have requested $881 million for this year, of which just under half has been received so far.

“Unfortunately, no Rohingya have yet been able to return to Myanmar due to Myanmar’s evasive attitude towards its obligations enshrined in bilateral mechanisms,” the Bangladesh Foreign Ministry said.

“The accountability of those responsible for the atrocities must be supported in order to build trust among the Rohingya for repatriation,” the report said.

The international community must create a “secure and enabling situation” in Rakhine to ensure the smooth “repatriation and reintegration” of the Rohingya, it said.

Save the Children said on Wednesday that the Rohingya were “fleeing massacres, rapes and systematic human rights violations” in Myanmar.

“Two-thirds (66%) of children surveyed and almost all parents and guardians (87%) say they do not feel safer now than when they arrived,” the report said.

“The findings show that the efforts of the international community, while significant, fall short of what is needed to adequately respond to the needs of Rohingya refugees.”

The United Nations says the conditions for return to Myanmar are still insufficient.

Myanmar has said it is ready to take back some Rohingya, but repatriation efforts have failed after the refugees refused to return for fear of persecution.