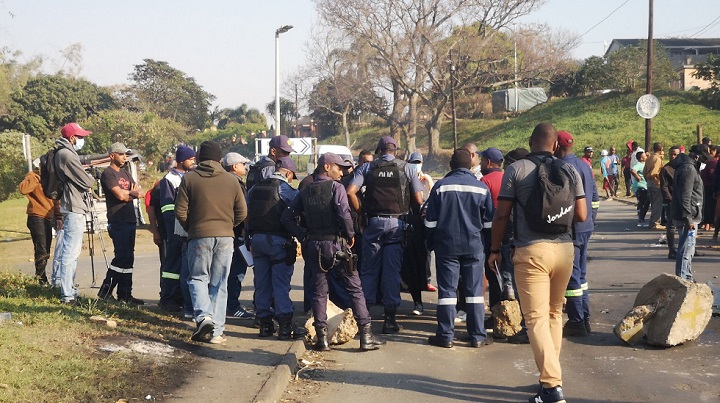 Residents of Hambanati in O Tongati, north of Durban, blocked roads into the township and set Jojo tanks on fire to protest poor water supplies following floods in April.

They say the water tankers supplied by the eThekwini Municipality do not meet their needs and they often go without water for days at a time. As a result of the flood, the main treatment plant was destroyed. The R31-million construction project to renovate the plant began in mid-July and the municipality says it will take four months to complete.

Businesses and taxis heeded the protesters’ call to stop work, and schools were also closed. Community members decided to air their grievances on days of no water, burning tires and tree trunks blocking the busiest roads.

#sabcnews #sabckzn The Hambanati community in Tongati district is protesting, calling on the government to provide them with water. They say they lasted more than seven days without water. They also burned Jojo’s tanks, saying they were of no use to them. pic.twitter.com/gIBIbf07vo

“As you can see, these Jojo tanks were burned for one simple reason. They were just left there. Unattended, not serviced. We very rarely see water in Jojos. So the community says enough is enough. Today we are asking the national government, we are asking the minister, if he does not come and deal with the problems of the people of Tongaat, we will not return home. We will stay outside.”

Sikhumbuza resident Mthembu says his daughter and grandson have been hospitalized for water-related illnesses. He says the two were only released from the hospital on Wednesday. He was among the elderly residents who came out to protest and called on the authorities to provide them with water.

“There is a child who has already died. Fell into the bucket, died. There are houses that suffered because they ran for water. Now very bad. This means that our government is completely failed. Because these Jojo tanks are spaced, they don’t fill up with water. That’s why people get angry, burn these Jojos, because they don’t need them.”

Niresh Kooblal says that while residents are fetching water from tankers and storage tanks, criminals use the opportunity to steal water meters and copper pipes from their homes.

“A few months ago, right after the water damage to our property, I had a water meter stolen from my yard. Then crooks came into my yard, stole all the copper pipes that bring water to us. At the moment I don’t have any pipes in my house. I just need to rake up the finds to reinstall the pipes. Not only me, there are many other people who have the same problem. As for the water meter, almost all the houses in Glen Rabanlal have been stolen.’

Coughing from the acrid smoke of burnt plastic water storage tanks, Zikalala said additional water tankers would be arranged to serve the public.

The community dispersed after meeting with the government. However, they said that they will resume protest actions if the last promises are not fulfilled.