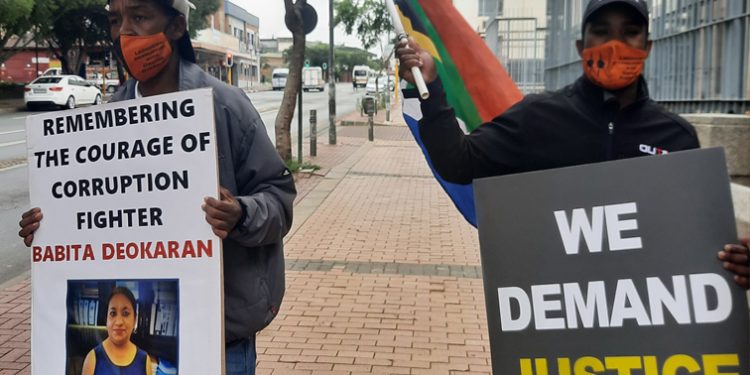 Today marks exactly one year since whistleblower Babita Deakaran was killed. Deakaran was a senior financial official at the Gauteng Department of Health and a key witness in several investigations into allegations of corruption in the department during the COVID-19 pandemic.

She was shot in the driveway of her home south of Johannesburg in what is believed to be a hit-and-run attack. The accused were arrested less than a week after her murder.

The Ahmed Kathrada Foundation, along with the Defend our Democracy Campaign and other organizations, organized a memorial in her honor.

There are still so many unanswered questions about her murder, and the six men accused of her murder were back in the Johannesburg High Court on Wednesday. But the initiator is still unknown.

Her brother Prakesh says they also hope it will lead to more arrests. He spoke to SABC News outside Babita’s home, where a wreath-laying ceremony is being held in her memory.

“Well, we’ve always trusted the justice system… and that’s why we’ve moved forward. To date… er… I won’t say we’re completely happy with it. Because at the end of the day remember it’s a bigger picture than just the six of them they caught. So we want whoever was involved to come forward and be held accountable.”

Advocate Celisa Tipanyane of the Institute for Responsiveness and Accountable Governance and Whistleblowers for Change speaks to the SABC: