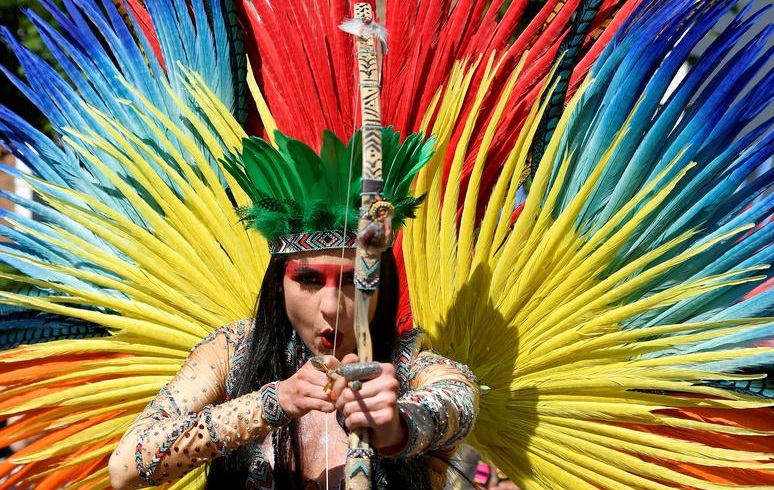 The large studio, located in a railway arch in Brixton, south London, hosts a colorful array of elaborate costumes and vibrant feathers to bring the Mas Band parade to life at London’s Notting Hill Carnival.

Billed as the biggest street party in Europe, the carnival returns on the British August bank holiday weekend after a two-year absence due to the COVID-19 pandemic.

This year, the challenges faced by organizers and participants are not nationwide lockdowns, but steep price hikes amid inflationary pressures ravaging the country.

Ray Mahabir, 58, artistic director of Sunshine International Arts (SiA), which runs the Mas Band studio, said the return of the carnival was “bittersweet” given the economic situation.

“Not knowing what we’re going to face is one of the biggest challenges for us,” he said. “Now everybody doesn’t have money or they don’t want to spend money because they’re not sure what they’re going to meet.”

Notting Hill Carnival CEO Matthew Phillips told Reuters that several bands would not be able to take part this year.

“Everybody’s going through this cost-of-living crisis right now, which ultimately means not as many people can buy suits, which has a knock-on effect… a lot of costume designers don’t do it for profit,” Phillips said.

Mahabir said the price of everything had doubled this year, with a full suit costing nearly 1,000 pounds ($1,185).

These costs are noticed by other members of the studio. Costume manager Natalie Russell, 35, said the price of feathers, often used on many of the costumes the studio designs, has tripled.

“Over a pound for one peacock feather. Which is crazy considering how much and how much we use,” Russell said.

Sustainability of the carnival

Mas Bands provide costumes for the Notting Hill Carnival where members of the public can buy a costume and join the band on the parade route.

The name comes from the word “masquerade” and has its roots in the emancipation of enslaved people in the Caribbean in the nineteenth century.

Before emancipation, they mocked and imitated the elaborate dresses worn by their masters at festive balls, incorporating elements of their African traditions, including costumes made from natural materials.

These traditions survived, turning into the modern Caribbean carnival as a fusion of African and European culture.

Notting Hill Carnival attracts over a million visitors and is considered a symbol of London’s diversity and rich multicultural history.

Artist and director of Notting Hill Carnival Council, Lynette Kamala, 52, said the impact of COVID-19 and the funding challenges organizers had faced this year had been an “extremely difficult task” but there was plenty of excitement after patient preparations for the return of the carnival.

The carnival began as an indoor event in 1959 in response to the poor state of race relations in Britain and as a celebration for the Afro-Caribbean community, which has evolved over the years into the colorful outdoor celebration it is today.

“Carnival and carnival art are resilient, they will always find a way,” said carnival boss Phillips. “That’s how it was born in the first place.”