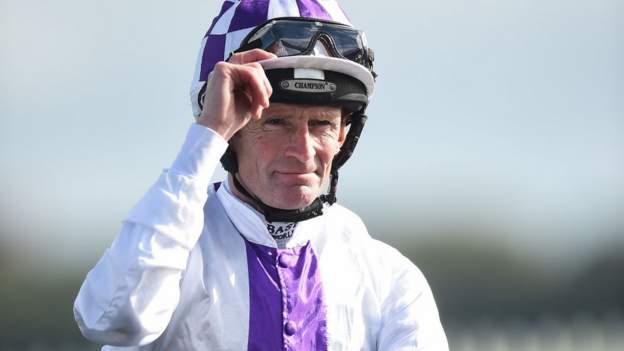 Former Derby winner Kevin Manning has announced the end of his 40-year career after winning the vocal course in Galway.

The 55-year-old Irishman rode his first winner in 1983 and has been a stable jockey for trainer – and father-in-law – Jim Bolger since 1993.

Together, the pair won eight British and Irish Classics.

“I’ve had a great career, I can’t complain, everything has been going well and I’ve enjoyed some great days,” he said.

“I’ve been suspended for this weekend, so it’s the end of the grass season, and I had a couple of good rides today and told myself it’s time to call it quits if one of them wins.”

He also won the Irish Derby aboard Trading Leather in 2013.

“I have been very fortunate to ride some very good horses along the way and to be indebted to Jim and Jackie [Bolger] everything,” Manning said.

“He has been the best jockey for the last 40 years and has done me and my family a great service,” Bolger said.

“He rode a lot of good horses and gave us some great days. He has had a great career and I have no doubt that he himself will be very happy with it.

“In the pantheon of jockeys, he’s right up there with the very best.”