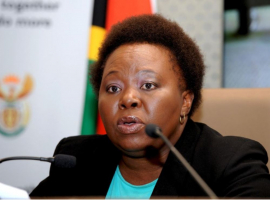 The government says the allegations that the National Treasury refuses to provide funds for disaster relief to the KwaZulu-Natal government are “mischievous and unfounded.”

Director General of the Government Communications and Information System (GCIS) and government spokesman Fumla Williams said the allegations were “mischievous and baseless at a time when the government and society are making every effort to restore the lives and livelihoods of those who affected by floods ”.

This was stated by the Democratic Alliance (DA) during a briefing on Monday.

To put the issue into context, Williams said that in cases such as floods when a disaster was declared, section 56 of the Disaster Management Act redefines the priorities of funds.

She said: “Prioritization of funds also corresponds to the state budget system. In the fight against the recent floods, the government has taken a step-by-step approach, the first being immediate humanitarian assistance and the second phase, which includes reconstruction and repair.

A spokesman said the reallocation of funds from the budgets was intended to fund immediate needs.

Thus, according to her, “there are no delays in the allocation of funds. However, there is a process that needs to be followed to unlock these funds. “

“The process includes provinces and municipalities that apply for these funds to the National Center for Disaster Management and the Department of Human Settlements, which, in turn, after processing them send them to the National Treasury.

“These funds will be available shortly after the National Treasury receives and processes the application.”

Williams stressed that the accountability framework has not changed.

“Procurement departments will have to make sure that procurement and supply chain processes are followed strictly. The government has also introduced additional monitoring measures through the Auditor General (OA) of South Africa.

“The AG will conduct a real-time audit of the disaster response tools available to provide much-needed assistance to affected communities. Real-time audits allow for non-compliance in a timely manner, and agencies will need to correct this. ”

The government urged all stakeholders and commentators to use factual information and not to create panic and confusion.

“It’s been a little over a month since the severe floods wreaked havoc in parts of KwaZulu-Natal, the Eastern Cape and the Northwest.

“In all these provinces, the government and all stakeholders have worked hard to recover from these tragic events. The government is mobilizing all available resources and making every effort to ensure that no one is left out in the recovery process, “said Williams. SAnews.gov.za

Mass executions: new defendants were added to the Khaelitsa case