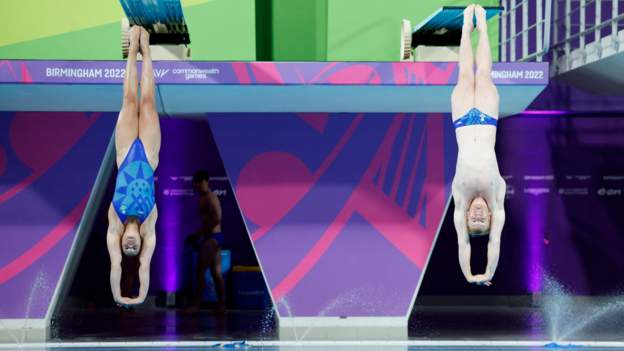 The pair climbed to the top of the standings thanks to a brilliant final jump that scored 74.40 points, giving them a total of 306.00.

Their win was Scotland’s 13th gold at Birmingham 2022.

This is the first time that men’s and women’s synchronized diving have been contested at the Commonwealth Games.

“It was tough but I’m so happy to do it with Grace and save it all for the last day.

“If it becomes an Olympic event, then we’re all for it.”

The English teenage pair of Ben Cutmore and Desharne Bent-Ashmail became the fourth.

Heatley and Reid, 26, who won bronze together in the three-metre synchro at the world championships in Budapest earlier this summer, did not medal in the individual events.

“Maybe it wasn’t what I wanted in my individual events, but to come back into it and win gold today with our whole family here is just mind-blowing,” Reid said.

“We welcomed today’s expectations and that performance in Budapest a few weeks ago really got us to where we are today.

“Now I have to lie down and I keep seeing people with pizza, so I make sure to eat pizza.”