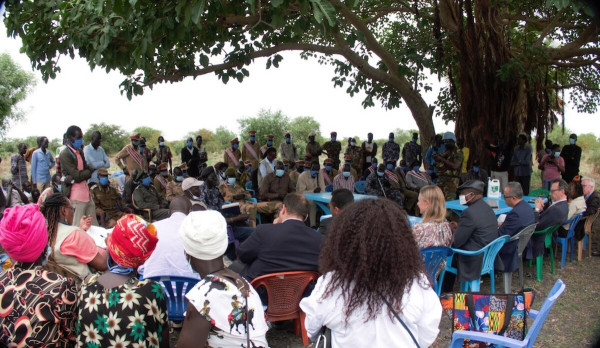 Its members, including representatives of the African Union (AU), the Renewed Joint Monitoring and Evaluation Commission (R-JMEC), the African Diplomatic Corps (ADC), the European Union (EU), the Troika (Norway, the United States and the United Kingdom) and the Organization Mission The United Nations in South Sudan (UNMISS) has spared no gruesome detail about what has happened here since February.

“You see me with these crutches,” said Tapita’s delegation, Nekat Loni, a survivor who seeks asylum in Leer. “I did not use them before, but the injuries I received during the clashes in my village led me to do so,” she said.

“Are you here to save us? Then let me say something. I have two children who managed to survive the attacks. if you have come to save us, let my children survive, ”she added before she and other severely injured people burst into tears.

Clashes in the state of Unity began in February 2022 and undermined the results of efforts to strengthen social cohesion in the region since the formation of the Transitional Government of National Unity. The widespread use of violence has led many residents to wonder whether the renewed peace agreement is still being implemented.

A look at the gloomy figures explains such astonishment. Between February and April, human rights officers working in the peacekeeping mission documented 155 people killed, 138 cases of sexual violence and 26 abductions of women and children in the three affected counties of Lear, Mayendit and Koch.

An estimated 40,000 people were forced to flee their homes. Schools were burned, civilian property was destroyed, medical facilities and humanitarian warehouses were looted. The chaos has dramatically increased humanitarian needs and put thousands of already vulnerable people at even greater risk. In April, a humanitarian worker was killed in Leer as he tried to flee an attack on his community.

A high-level joint delegation headed to Southern Unity to express solidarity with the affected communities and to reiterate its support for the people and Government of South Sudan in advancing the peace process.

Listening to the experiences of the survivors in Leer, Rubquay and Mirmir will serve as a stark reminder that much work remains to be done.

“When the first fighting broke out, four women were killed. Three more died during the second wave of clashes, ”Mirmir women’s leader Nechak Gatvich said. “When we were hit by the third outbreak of violence, we lost eight more women. It was only those we saw, but there were many more victims. “

Terrific acts of violence were perpetrated by armed young people from communities who raped women and young girls, looted property and destroyed what could not be taken away.

The survivors appreciated the visit of high-ranking officials from ancient times, as it provided an opportunity to express their despair, devastation and disappointment.

Shock and distrust can be added to the unstable mix of emotions expressed by Nyalok Dry Chuol, another woman who survived the town of Lear.

“How did we deserve this? Is it okay for a group of young people to rape their mothers and sisters and leave them bleeding? Do you, the international community, see these atrocities? “We need your protection,” she exclaimed.

Wherever they went, members of the visitors were met with growing restraint and desperate pleas for help.

“We have been looking forward to this meeting since we heard about you coming here,” said James Gadjik Toth, an internally displaced man who survived the clashes. “If you have come to save us, then give us the protection of the civilian population where we can be safe,” he added.

Spending most of its limited time in the field listening, the delegation also took the opportunity to assure them that the security and humanitarian situation would be resolved in any way possible.

“Your messages are loud and clear, and we want to thank you for your sincere cooperation,” said Guang Tsung, Deputy Special Representative of the Secretary-General for Political Affairs of the Peacekeeping Mission. “The composition of this high-level delegation shows the serious concern of the international community about what has happened in the State of Unity,” he said.

Ambassador Yoram Mukama Biswara, head of the African Union mission in South Sudan, noted that peace and stability can only be truly achieved by the people of South Sudan with the support of the international community.

“Whether you are on the side of the government or in opposition, you are all residents of South Sudan. Young people, it doesn’t matter what community you belong to, because you are the leaders of tomorrow, and tomorrow begins today. You have the potential to change the game, do not let politicians manipulate, ”he urged.

At a time when the Women, Peace and Security Agenda has become an important component of peacebuilding, Ambassador Biswar also addressed women in general and mothers in particular.

“Advise your children, your brothers and your husbands. You are the mother of this people, and you can lead your people to the land of the promised peace. I know you can do it, ”he said, encouraging the women present.

The members of the delegation promised to do everything in their power to hold those guilty of atrocities accountable for their actions.

“We call on the government to take steps to identify the culprits. We call for justice, ”Guang Kong said.

However, violence must end first. After weeks of relative calm, a May 16 raid on cattle that reportedly led to the killing of eighteen people suggests that a decision leading to peaceful coexistence in the conflict zone remains elusive.

Distributed by APO Group on behalf of the United Nations Mission in South Sudan (UNMISS).