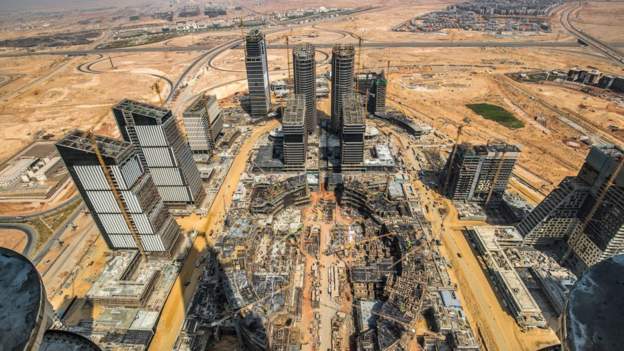 Egypt’s National Olympic Committee (NOC) says “the time has come for Africa” ​​as it bids to become the continent’s first country to host the Olympics.

“We are preparing a letter (to) the IOC with our intention to submit a bid to host the 2036 Olympic Games,” IOC Secretary General Sharif El-Erian told BBC Sport Africa.

“The time has come for Africa. It is the only continent that has not hosted the Summer Olympics and I think Egypt is one of the few countries in Africa where the infrastructure is ready from today to host such a big event.”

A This was announced by the Cabinet of Ministers of Egypt said IOC President Bach “claimed that Egypt’s sports infrastructure gives it the ability to host the 2036 Olympic Games.”

As a guest of the country’s sports ministry, Bach visited the 92-hectare complex, to be called the Olympic City, to be built in the so-called new administrative capital, now under construction about 40 kilometers east of the existing capital, Cairo.

Work on the Olympic Stadium, which began in 2019 and will be the second largest sports stadium in Africa, is at an advanced stage and El Erian says many facilities are already ready to go.

“The only thing that needs to be built is the Olympic Village, but winning the bid comes more than seven years before the actual Games,” El Erian explained.

“So if we win the bid, we’ll have plenty of time to build a modern Olympic village.”

Egypt, which has hosted several continental and global events in recent years, such as the African Cup of Nations and the World Handball Championship, was considering a bid to host the 2032 Games.

yet Brisbane was announced as host last year, before any Egyptian intentions were made, organizers were less keen after the coronavirus pandemic postponed Bach’s proposed visit to the North African country, originally scheduled for 2020.

“We know we have to act now,” El Erian said, even though the formal bidding process is years away.

“We know we have competition from five or six other countries that have expressed their intention that they would also like to host, but we are confident that our bid will be one of the strongest.”

Other countries whose cities are reportedly interested in hosting the 2036 Games are Germany, India, Mexico, Qatar, Turkey and Russia.

“I have to calm people down”

Since the government won support for its bid to host the 2036 Games, enthusiasm among Egyptians has been so great that some believe the Games have already been awarded.

“The population is so happy – the media, everyone is talking about it,” says El Erian.

“I’m trying to reassure people by saying that we haven’t won the bid yet, but some people think we’ve already won it and they’re celebrating the fact that Egypt is going to host it.

“Nothing can be 100% – you will certainly find some opposition – but let’s say 99% of the population will support it. We love sport and the Olympics is the biggest event in the world.”

Ultimately, the decision will be only the second awarded under the IOC’s revised process, in which the Future Committee engages in focused dialogue with selected countries to reduce unnecessary application costs.

If Egypt gets the chance to host the Games, which El Erian has worked on for years, he believes it will bring the country back to success after a period when its reputation has been tarnished by revolutions, political upheaval and civil instability.

Unlike the costs of hosting multiple Olympic Games, Egyptian authorities believe that this event can boost Egypt’s economy and tourism industry, given the existing capacity and the expected number of people who will watch any Games.

“It will be the best thing for Egypt,” says El Erian. “It will definitely help to increase tourism and give a positive image and perception of Egypt.

“It will also boost the economy, especially since we have the infrastructure. We are not going to spend billions preparing for these Olympics – no, Egypt is ready.”

Egypt’s security has long been in doubt, especially since President Hosni Mubarak was toppled in the Arab Spring in 2011, before a coup two years later toppled Mohamed Morsi, the country’s first freely elected president, a member of the Muslim Brotherhood.

In 2014, Islamic State stepped up its insurgency in the Sinai Peninsula, while a 2019 bombing of a tourist bus in Cairo injured at least 16 people.

“Everything has been normalizing for many years now. In terms of security, Egypt is an extremely safe country. Tourism, infrastructure, everything is in place – so why not go for it?”