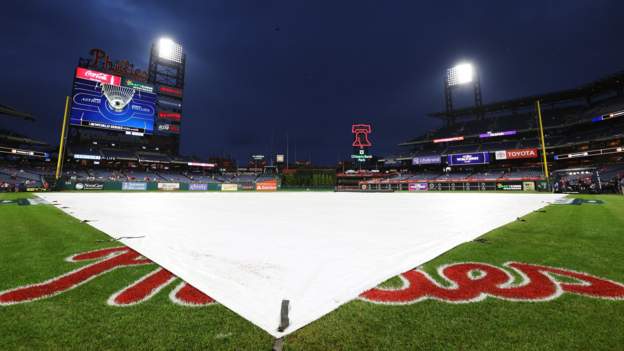 Heavy rain in Philadelphia forced the postponement of Game 3 of the World Series between the Phillies and the Houston Astros.

As fans waited in the rain at Citizens Bank Park, it was eventually canceled just over an hour before Monday night’s scheduled first pitch.

After the first two games in Houston, the best-of-seven series is tied at 1-1.

The series schedule will be moved up a day, with game three on Tuesday and game four on Wednesday.

Game five, also in Philadelphia, is now being moved to Thursday — originally scheduled as a travel day — while games six and seven, if required, will be played in Houston on Saturday and Sunday.

“It affects both teams,” Astros manager Dusty Baker said. “You can’t control the weather, you just deal with it.”

The delay allows Baker and opposite Rob Thomson to review their opening pitching strategy.

The Phillies tabbed Noah Syndergaard to start Monday, but instead will go with Ranger Suarez in Tuesday’s postponed Game 3 — their ace Aaron Nola, who started Friday, can now start Game 4 on complete rest.